Tropical Weather Discussion for North America, Central America Gulf of Mexico, Caribbean Sea, northern sections of South America, and Atlantic Ocean to the African coast from the Equator to 31N. The following information is based on satellite imagery, weather observations, radar and meteorological analysis.

Based on 1200 UTC surface analysis and satellite imagery through 1730 UTC.

Central Atlantic Storm Warning: A non-tropical low pressure area with a central pressure of 981 mb is located about 925 miles east-southeast of Bermuda near 28N50W. The system continues to produce an extensive area of showers and thunderstorms. However, the low remains embedded within a frontal zone, which is expected to become even more pronounced later today as the low begins to move east-northeastward at 20 kts toward colder waters and interacts with a mid-latitude trough. Therefore, it is unlikely that the low will transition to a subtropical or tropical cyclone.

Showers and thunderstorms are within 120 nm of the an occluded front, stretching from the lows center northeastward to 31.5N45W, then southeastward to 29N40W, where it transitions to a stationary front. Recent satellite scatterometer imagery reveals a large area of gale force winds mainly north of the low, between 41W and 54W. Storm force winds continue north of the low from 29N to 33N between 45W and 50W. Seas are peaking at 29 ft within the area of storm force winds, with very rough to high seas covering an extensive area between 40W and 70W. Storm conditions will move E of the area today, but gales will prevail into tonight in the far NE waters. Large long-period north to northeast swell will impact the Atlantic waters and Caribbean Passages between the southeastern Bahamas and the E Caribbean producing high seas into the start of next week, with large E swell reaching the Florida offshore waters N of 26N early Fri through Sat.

More information about this system, including the associated Storm Warning, can be found in the High Seas Forecasts issued by the National Hurricane Center at https://www.nhc.noaa.gov/text/MIAHSFAT2.shtml

A 1024 mb surface high is centered offshore the FL Panhandle supporting generally fair weather conditions and mainly gentle moderate easterly breezes over the basin. Recent altimeter data and buoy observations are reporting 3 to 5 ft seas over the western, central and far southern portion of the basin, with seas below 3 ft north of 28N and about 120 nm offshore the FL west coast.

The pressure gradient between subtropical high pressure in the western Atlantic and lower pressure over Colombia is generating moderate to fresh NE winds west of 70W in Caribbean Sea, including the Windward Passage, where seas are likely 6 to 8 ft in NE swell. Over the waters between 75W and 70W, seas are 5 to 7 ft. In the E Caribbean, gentle to moderate N winds prevail with mainly 5 ft seas. Seas may be up to 6 ft near Atlantic passages.

For the forecast, a deepening low pressure system over the central subtropical Atlantic will continue to strengthen during the next few days as it lifts northeastward. Large NE swell across the central Atlantic will move through the Caribbean Passages and Tropical Atlantic waters through Sat. The current weather pattern will support NE-E winds across much of the forecast waters. Fresh to pulsing strong NE-E winds will occur in offshore Colombia into early next week. Moderate to pulsing fresh NE winds will affect the Caribbean Passages and the lees of the Greater Antilles into Fri.

Please read the Special Features section above for details on a storm force low pressure system, affecting the waters north of 18N between 35W and 60W.

Elsewhere, scatterometer data reveals fresh to strong N to NE winds from the Caribbean Islands to 31N and between 61W and 75W, where seas are rough to very rough due to the low pressure system in the central Atlantic. A weak pressure pattern prevails off central and northern Florida, with gentle winds and 4-6 ft seas in the far western Atlantic. In the far eastern Atlantic, a weak high pressure center prevails offshore W Africa, allowing for gentle to moderate anticyclonic flow mainly east of 35W, where seas are 5 to 9 ft.

For the forecast W of 55W, large long-period north to northeast swell will impact the Atlantic waters and Caribbean Passages between the southeastern Bahamas and the E Caribbean producing high seas into the start of next week, with large E swell reaching the Florida offshore waters N of 26N early Fri through Sat. 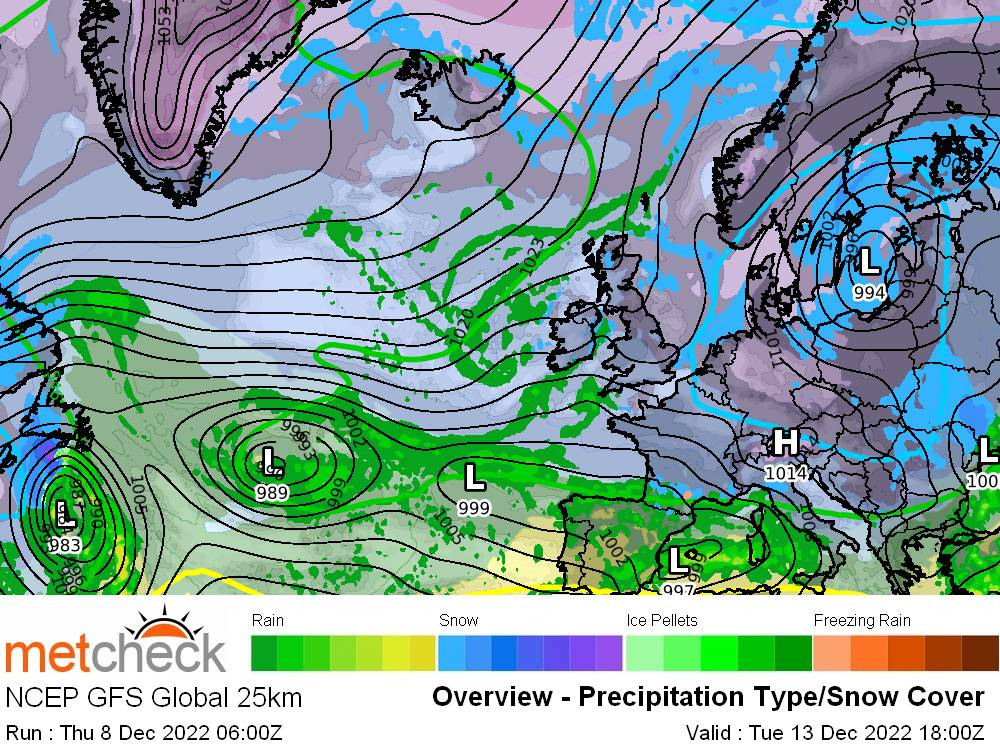 The globals struggling with a weather system in the Southwest next week and for good reason... 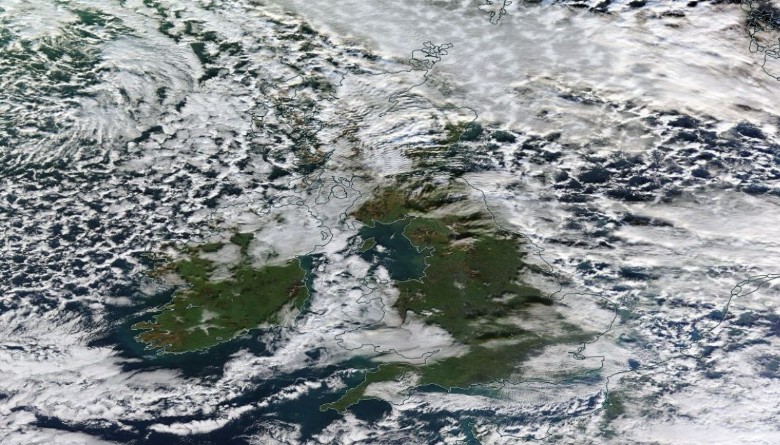 Tropical developments in the Indian Ocean, dust across Sicily and the UK in a cold Northerly airflow today... 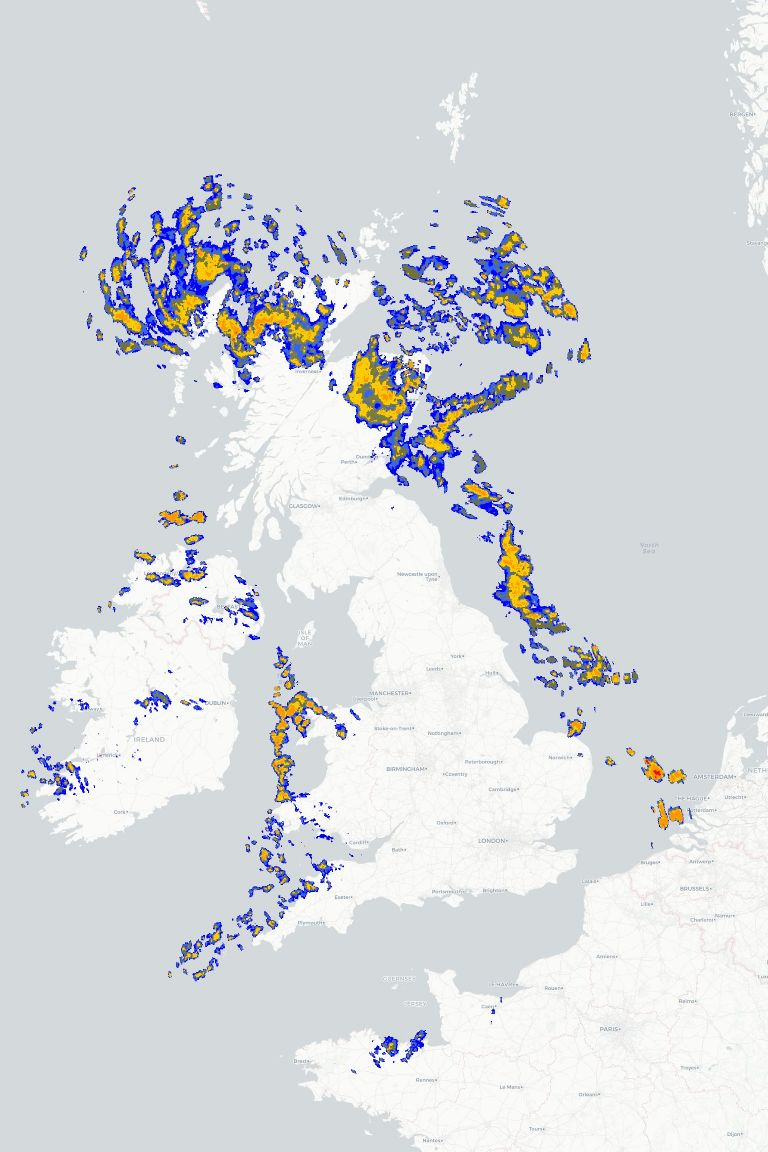 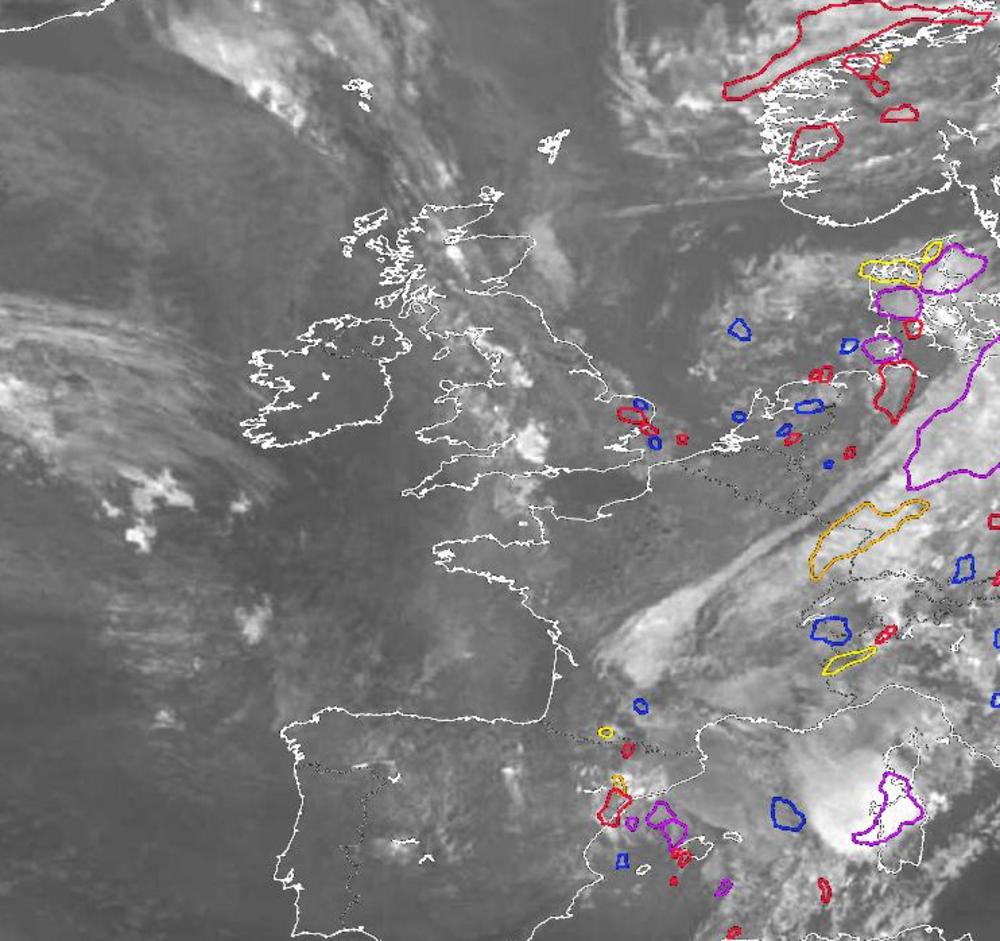 Whoah! How clever is this? The Metcheck Thunderstorm Tracker Satellite allows you to see the developing storms across Western Europe and tells you whether they are growing or decaying. Every 15 minutes we take a snapshot of the cloud cover then measure the temperature and height of the clouds and show you whether the area of clouds are developing into thunderstorms and what direction they are moving in.